South Carolina is the Most Underrated Atmosphere in CFB

As of Thanksgiving weekend 2011, my college football tour stops had included such hallowed halls as Notre Dame, Ohio State, and Oklahoma.  I walked out of Williams-Brice Stadium in Columbia, South Carolina thinking that a Gamecocks home game was as rowdy and raucous as any place that I'd ever been...

For the second straight year, the opportunity to add a stop to my tour came about organically.  After my trip to OU in 2010, I figured that was it - I'd be (content) watching at home for the rest of the season.  Well, then NC State rolled through September undefeated, so I had to take my wife to see her first in-person game at my alma mater.  Then, my buddy, Dean, arranged for a few friends to go to South Bend for a November game; I certainly wasn't passing that up.

Repeat in 2011.  Blacksburg, Virginia to see the Hokies.  Check.  Back to football on the couch.  Yet, it was a day with a gray October sky in 2011 that I got a call from my stepdad, Mickey.  The Gamecock alum said he could get tickets for South Carolina football.  "Which games," I asked.  "Florida and Clemson," he later emailed.  Book it.  South Carolina vs. Clemson has incredible history.  Dare I call it the south's most heated rivalry that nobody talks about?  When I was applying to colleges back in the day, South Carolina was actually near the top of my list.  A visit to the campus yielded pleasant dreams of going to school out of state.  That never came to pass, but during the brief few months that I thought about attending the other USC, I learned enough about its sports lore to understand one thing above all else: beat Clemson and the season isn't a failure.

So, we made the trip down I-85 and I-77.  To our delight, it was actually a very pleasant evening for a late November night game.  I was comfortably able to shed my Notre Dame coat, allowing Mick and I to proudly display our matching Carolina shirts.  We had excellent seats.  Personally, I think the best seat in a college football stadium is right between the 10-20 yard line.  You can see everything that from that spot - a perfect view of the game, plus an easy panoramic view of the crowd. 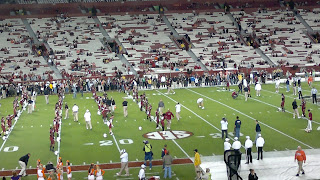 South Carolina came into the game looking to notch a 10-win season for only the second time in school history.  Clemson was a week away from playing for their conference title in the ACC Championship game.  So, Mick and I lucked out in being there for what was, in historical context, one of the most highly touted games in the rivalry.  They both were 9-2.

I'm quite certain that the guy behind us had drank both team's combined win totals in Bud Lights while tailgaiting throughout the day.  Of the venues I've attended, thus far, that guy won the award for drunkest old man.  He was sitting right behind Mickey, who has a good amount of patience, but if it wears out and you're in his path, then that's not a good thing (trust me).  There was a part of me that wanted the old dude to stumble into Mickey one more time (he did it several times) just to see what my stepdad would do - most likely a verbal castration that either would have ignited a brawl or made the guy go crawl into a corner and suck his thumb.  Luckily, old guy's wife wisely decided to usher her inebriated husband out of the stands to sober up a bit.  Unfortunately, that was not before the guy got into it with the people sitting next to me.  When old drunk slammed into my seat neighbor's spouse, he was kindly asked to calm down.  That was like poking a gamecock with a hot branding iron.  Spoken bedlam briefly ensued.  The drunk returned after halftime and apologized...sort of.

The rest of the people sitting around us were as nice as could be.  The lady sitting next to the drunk behind us struck up a conversation with me.  I told her about my tour and Mick's graduate work he'd done at SC a few decades prior.  All in all, a good group of fans.  They were just a few of the 83,000 plus in attendance and just as crazy about their (game) cocks as the rest of them.  Awesome, awesome, awesome fan base, especially when you consider that their football tradition consists of, other than their Heisman winner and one ACC title, years of struggle and strife and a barely above .500 winning percentage.

I was blown away by how loud the place really was, as I'd heard from ESPN commentators over the years that they had a great home crowd but never could imagine it rivaling some of the other places that I'd been.  From the pregame school band rendition of the 2001 Space Odyssey theme, which to me will always be the music of "The Nature Boy" Ric Flair, to the continual use of the late 90s techno-hit "Sandstorm" (a newer tradition that was easily the most memorable part of the experience - see http://www.youtube.com/watch?v=ErJo2CpAYps&feature=relmfu), South Carolina is one of the most entertaining home stadiums in college football.  Throw in the appearance of Sir Big Spur, the live gamecock, and you've got several sights to behold.

South Carolina took a 17-10 halftime and lead and wore down the eventual ACC Champions to the tune of a 34-13 victory.  The Cocks went onto win their school-record 11th game during bowl season, upending Nebraska on January 2nd.  We had a great time watching them put the finishing touch on their historic regular season.  Repeat stops on the tour might not be a regular thing outside of Notre Dame and NC State, but since SC is so close, I certainly wouldn't mind going back.

On a parting note, it's better to exit a sea of garnet and black after a convincing victory.  Had the Tigers won, I'd have hated to see more people like the old drunk with a reason to be angry.  It was, after all, only seven years removed from the famous brawl between the Clemson and Carolina players. 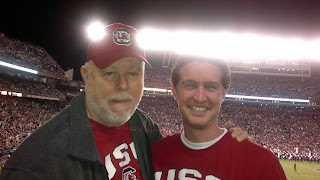