The First Trip to Notre Dame was a Religious Experience

This weekend, I return to South Bend for another late November home game for the Notre Dame Fighting Irish.  It's a bittersweet return this time around.  September 30, eleven days after the birth of my daughter, my father passed away after a six year off again, on again battle with cancer.  I'm going back to Notre Dame to get some closure.  I was able to see my dad the week before he passed, but I couldn't really say "goodbye" in person.  How do you do it?  I didn't figure it out.  So, to celebrate his life in my own way and to live the goodbye that I couldn't bring myself to say, I leave Saturday morning for a rapid fire day dedicated to Rich McIntyre.  Yet, as I sit here making the final arrangements for the trip, I am harkened back to six seasons ago...

During the spring of 2006, a few months after having the original tumor removed, my dad called me and we began talking about the upcoming season.  The Lindy's College Football preview magazine had just come out and we'd each gotten our respective copies of what we came to call from that season forward, "The Football Bible."  During our conversation, I suggested that the early year scare gave us no excuses to further postpone our first trip to see the Irish play live, in-person.  I was living in St. Louis, Missouri, at the time, and we were a mere 6 hour drive away. It was a no-brainer of a decision.

We chose an "easy" game.  The Irish were pre-season ranked #1 by many publications, returning Heisman-frontrunner, Brady Quinn, and the other key players of a high powered offense.  Charlie Weis had come back "home" to his alma mater from the New England Patriots, where he'd steered the offense as coordinator to three Super Bowls.  In 2005, Weis was one of the many different winners of the various Coach of the Year awards.  Year 2 brought about dreams of the glory days.  Nevertheless, my dad and I did not wish to make our first trip to Notre Dame on a day where there was much probability for a loss.  For instance, the Michigan game - which ND ended up losing 47-21.  Glad we didn't pick that one.  Lowly, at the time, Stanford, was our choice.  They entered the October 7, 2006 game winless on the season.

September 2006 was a rough time for me, personally.  It was as tumultuous as any time in my life.  The Irish were, as usual, a nice escape from the real world that I needed, then, more than ever.  The trip to South Bend was just what the doctor ordered to get my mind off everything else.  Dad flew into town on a Thursday and we proceeded to thoroughly enjoy several watering holes with my friends going through the wars, so to speak, in professional school.  The next morning, we got up and drove up through Illinois, hung a right at Chicago, and made the trek to Notre Dame.

Quick thing about South Bend, Indiana - not a very aesthetically pleasing place to be outside of the University campus.  That is all.

We actually made it to the campus just in time to catch the pep rally at the Joyce Center right near the football stadium.  Some guy was nice enough to give us one ticket, which we proceeded to pretend was two tickets and McIntyre charm our way past the female gatekeeper.  That was a cool experience.  Other than at NC State, I'd never been to another school's pre-game pep rally.  To this day, that remains one of the most unique experiences I've had with college sports; a memory that I will continue to cherish.

After the pep rally, we took the tour.  We traveled the lengths of campus, taking in the sights that I had first seen when my dad took me to see the movie, "Rudy," at the theaters during the '93 season.  The Grotto, where candles are lit and prayers are spoken, the Golden Dome, Touchdown Jesus...if there is a university with more well-known, must-see landmarks, you'll have to enlighten me.  It was simply awesome to see all of it in person.  The one thing that we didn't see was the College Football Hall of Fame.  We got there too late on Friday and it isn't open on the weekends.  I digress.

You want to know how much money college football generates for major, top-ranked schools?

$200 per night was our hotel fee...at the Econolodge.  I've been in nice Econolodges before, but this one was a dump.  I never stayed at a South Bend hotel again after that.  I've traveled 15 miles for a nicer, more reasonably priced hotel ever since.  It was worth it, though, for that trip.  We wanted to tailgate and not worry about having to drive, so the Econo-ripoff was close enough to campus to take a taxi to the stadium.

Dad and I started a trend.  I will continue it this weekend.  I have actually not done any tailgaiting outside at Notre Dame Stadium.  We thought about it on the first trip, but we needed to eat first.  So, we walked into a restaurant-bar right outside of the stadium called "Legends."  To me, "Legends" has become legendary.  That's the place to be, in my opinion, before a game.  You can eat breakfast, lunch, and dinner there.  You can drink draft beer there.  You can watch every other game on the college football menu for that day on the several huge screen televisions there.  Ask anyone that has accompanied me to Notre Dame and they can tell you about "Legends."  Every time that I've been, it has been easy to get a seat.  You might have to wait a few minutes, but once you're in there, you're good to go (knock on wood for this weekend).

We spent the better part of the morning and early afternoon hanging out and watching College Gameday and other games.  When 2:30 rolled around, we made our way to the stadium and got our seats.  We had this picture taken on the unseasonably warm day as the players were warming up: 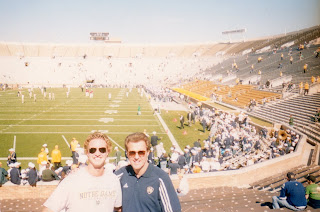 Our seats were in the end zone facing Touchdown Jesus.  That was not intentional, by my recollection, but it was one of those fateful moments that becomes the icing on the cake to a very memorable trip.  We did not know all of the traditions, yet.  We both knew the fight song forwards, backwards, and sideways, but the rest of the in-stadium, live traditions were lost on us.  There was that moment, though, where we both realized that the other was cheer, cheering for old Notre Dame and just kind of smiled at each other.  One of my favorite son-father moments.

The Irish romped to a fairly pedestrian 31-10 victory, but the result was never in question and their slim chances of a national title remained alive for another week.  After losing the third game of the season to Michigan, the Irish won 8 games in a row, rolled into the Los Angeles Coliseum 10-1 and proceeded to get their butts kicked by Southern Cal (again), dashing their BCS Championship dreams and ours.  That took nothing away from being there for the third of those eight consecutive victories, though.  I rank that amongst the top 5 weekends of my life, to this point.

When my dad and I both realized that his end was near in May of this year, we talked a lot about our Notre Dame trip.  This year was to be our second together.  For Christmas in 2010, my wife and I planned to take my dad to the Wake Forest game in Winston-Salem, NC for the 2011 season and then to the Wake game at Notre Dame this season.  We knew before the summer started that said trip was not going to happen.  He called me one day while he was in the hospital and said that a man stopped by to talk to him about making a bucket list; asked him if there were any places he wanted to go or things he wanted to do before his time on this earth expired.  My dad told the man, "I've traveled the world...and I've been to Notre Dame with my son.  I've done everything that I wanted to do."

So, tomorrow, I make my latest trip to South Bend.  I started to write that I'd be alone this time, but my dad actually will be with me.  He'll be there.  And that will be his final resting place.  I will creatively find a way to spread his remains where he and I had our greatest road trip.